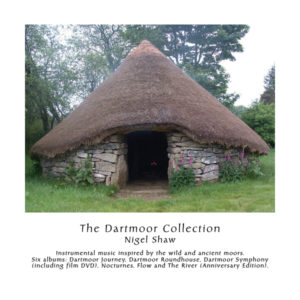 This double album of music and film offers a rare opportunity to hear Nigel’s music performed within a live orchestral context. Drawing inspiration directly from the Dartmoor landscape; a constantly evolving journey into how the voices of nature can be expressed through traditional, classical and indigenous instruments.

Dartmoor Symphony, Dartmoor Roundhouse and Dartmoor Journey form a trilogy of compositions that draw direct and profound inspiration from the Dartmoor landscape. Nigel created this work with three key elements at its heart: his handcrafted wooden flutes all sourced from Dartmoor native trees, the ceremonial ancestor roundhouse we designed and built on our hill farm, and the ebb and flow of seasons, wild weather and the life-death-regeneration of nature that has permeated his experience of living and working in the centre of the moors. The trilogy project was a long time in the dreaming and preparation; it has been part of Nigel’s ever-deepening, ever-expanding prayer for the land which has become his home, his muse and his sanctuary.

This album, the third in the Dartmoor Trilogy, offers a rare opportunity to hear Nigel’s music performed within a live orchestral context. This was his first experience of working with an orchestra and embracing the task of preparing written music, although he has never composed using music score throughout his career. The first recording sessions were held at our farm; the combination of low ceilings and energetic string players encouraged the move to a beautifully vaulted yoga studio for the rest of the sessions.

Dartmoor Symphony is a soul-filled expression of the extraordinary beauty and power of these ancient hills, drawn from many years of intimate connection with the moors and a constantly evolving journey into how the voices of nature can be expressed through traditional, classical and indigenous instruments. Echoing some of the themes and melodies from the previous albums in the trilogy, Nigel has developed the music into a richly textured symphonic composition that describes the landscape and our human relationship to it. A sense of journeying, yearning, returning, and belonging are central to the feeling of this work as it travels through the Overture and four movements of Stone, Wood, Water and Sky.

For this project Nigel handcrafted a unique set of Dartmoor yew wood flutes, which are woven constantly through the music. Each movement also includes instruments made from the raw materials and elements of the land, including granite grinding rocks, wooden bells, water bowls and air chimes. Also featured are traditional whistles, small pipes, fujara, overtone flutes, piano, harp, celeste and other percussion. Vocal parts are sung by Carolyn Hillyer. The string parts are performed by members of Ten Tors Orchestra, a professional chamber orchestra based in southwest England; many of these musicians have played or continue to perform with leading national ensembles.

This double album includes the DVD of an exquisitely beautiful film, shot by Dartmoor photographer and film maker Chris Chapman, edited and produced by Nigel. The film is a journey through all the seasons in the Dartmoor landscape, moving from close abstract images of wild nature to the expansive open hills; a symphony of images and a visual reflection on the composition that flow seamlessly alongside the music. Thus Dartmoor Symphony may be enjoyed with the film or as an audio experience alone.

Extracts from the Dartmoor Symphony film.