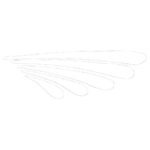 This series began during winter 2011 and continued through to summer 2015 by which time the full circle of thirteen ancient weavers sat working around this loom. The loom cloths were created first, using a mix of self-woven pieces, vintage hand weaves and cloths gathered from travels and women’s circles. The voices of each particular aspect of wild land (mountains, rivers, forest) were anchored in the cloth and then gradually drawn into the painting of the weaver. Each painting took between two to four months to complete. The cycle includes the weavers of mountains, forest, rivers, islands, caverns, wild hills, oceans, desert, tundra, valleys, meadows, earth and sky. Nine of the Shaman Weavers were exhibited for the first time as a large installation in the summer 2014, within a shrine that represented the ancient house of weavers and the primordial world loom. In the autumn 2015 the full circle of thirteen weavers gathered together around the loom at last, within a great white dome during Thirteen Moons Women’s Festival on Dartmoor; that weekend they were visited by over 400 women. Carolyn’s album The Wyched Wombe includes songs connected to these shaman weavings.

‘We were sitting near the bottom of a great loom, shaped like a broad open bowl. Above us a ring of faces were working at the rim, old fingers reaching down to twist and tie the threads, quick hands moving back and forth around the warp, colours being braided, bound and trimmed. The women worked in silence, thirteen weavers at the loom, thirteen wizened sisters in this house of weavers. Many faces, many lines of blood, many lands, many cultures lost and living, many long forgotten bones. The fabric tumbled down between their hands as they bound the threads. And into the cloth they were weaving lives and stories, myths and memories, cruelties and kindnesses, all tied into the fabric that fell from the loom. Down in the centre of the bowl, the length of woven cloth fed through a hole, the warp and weft constantly dropping, carrying all the textures, all the patterns, all the colours of the world. The work of a thousand, thousand weavers, coiled deep down to the fragile faded weavings created by the very first to sit around this loom. We sat within the lap of this life weaving and watched the sisters at their work. We saw our own lives played out along their yarns…’ from SACRED HOUSE

Click onto any print to view the full description.