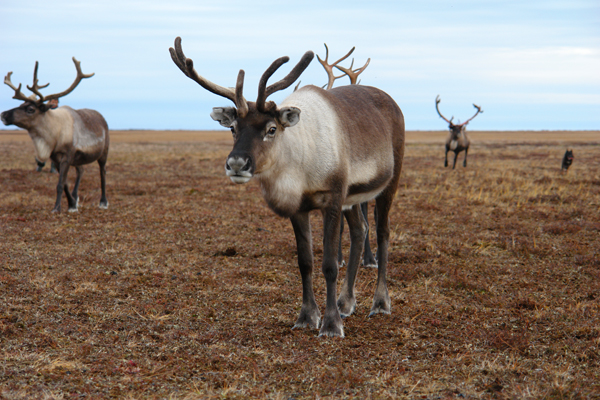 The edge of the world is where we are bound with a weapon of grace and a fine shield of sound
we can hear a familiar voice close at hand, the primordial song of a northern land
as it races the great sun over ancient snow, the drum beast is older than we can ever know
we’ve heard a journey north is a dangerous one so ride hard through the skin of the nameless drum…
from the album Weathered Edge by Carolyn Hillyer

Below is a sliding photo gallery – click on the first square image to open the slide show and to view the images in full.

Photos and film by Ruslan Alikulov and Nigel Shaw

EDGE OF THE WORLD

We had been heading north for a long time. It was archive recordings given to us in Latvia that opened up a view through to the distant north. These ancient voices, recorded since the 1920’s and catalogued during Soviet times, belonged to singers from Nenets, Chukchi, Yakut and Khanti tribes. We carried them home to Dartmoor and listened to them for several years before deciding to create a music project seeded by some of those songs… and we started to travel north towards the ice.

One day we landed in northern Siberia with the autumn colours of the tundra stretching out all around, in the Yamalo-Nenets Autonomous Region where the Arctic circle passes between the tribal lands of Nenets and Khanti people. Our friend Tatyana was waiting, with other Nenets women in full costume, to sing our reunion. That night we met Yelena Susoj, old and frail Nenets singer. She sang into our ears; we knew her voice so well for she had been singing us north for fifteen years and at last we could thank her for the gift of it.

The deep heart of our journey still lay ahead, a long way up the Ob River towards the Kara Sea and out into a wild land of reindeer herds and the solitary choom. After a night and a day, the river boat reached the outpost of Novy Port. There we waited while searching for a way to travel the final part of the journey from settlement to choom.  Tatyana’s family group had moved deeper onto the tundra to avoid flooding, boats were without petrol to carry us, but after lengthy negotiations and a Nenets prayer for success, we were on our way. Our first vehicle sank into a deep bog within ten minutes; a second with tow bar got us moving again. We travelled to two chooms pitched beside a small river, which we crossed by balancing delicately on a small raft made of broken slabs of polystyrene packing tied up in a fishing net. Near to the tents, around fifty reindeer grazed and clicked their toes across the moss. We were not staying here but collecting the animal that would be eaten later that day. Radik, who owned part of this herd, chose and roped a small deer while other men gathered five more to pull the sled.

The reindeer was trussed and calmed and loaded onto the sled, which set off across the tundra while we followed behind. The lack of rock, stones, or even river gravel in the landscape surprised us; moss and low vegetation grow to a depth of 20 centimetres above the permafrost and the bedrock rests far below. Thus the land forms a soft spongy surface over which a sled can run when there is no snow and ice cover. Before the winter arrives however, and with it the ability to travel as the crow flies, the tundra is covered by thousands of water channels, lakes and pools left by the melting snow, all of which must be skirted around or forded so that any journey involves many winding detours. The land is a flat and wide expanse that reaches out to all sides; the lack of high ground means that any slight hill or raised bank becomes sacred ground and a site for offerings of small coins or reindeer skulls. Clusters of sleds are scattered across some of these low slopes, packed with clothing and tent covers for the winter and awaiting the return of family groups from migration routes further to the north. Sprigs of wild rosemary are tucked into the sled ropes to discourage lemmings from chewing at the skins.

We arrived at Radik’s mother’s choom towards the end of the day and the ritual killing of the reindeer immediately took place. The animal was strangled, a slow but tenderly enacted process that ensured no blood was spilled and wasted. Offerings and prayers were made to the dying deer. The body was immediately skinned, the butchering was fast and within minutes the food was ready, a red soup of raw meat and organs and blood stirred within the cavity of the warm carcass. Eating while the animal is still warm conserves energy and saves on cooking fuel. In fact to take a reindeer at this time in the year is rare; the autumn diet is usually raw fish, hare, duck and goose. Nenets people love their herds and only kill when winter sits heavy and all other food sources have been eaten.

We all washed and entered Tanya’s choom to share tea and whisky. In Nenets culture the choom is owned and maintained by the women. During the summer the tent cover is made from dark canvas, then thickened with layers of reindeer skins before the snow arrives. The herds, hunting and all matters outside on the tundra, are in the care of the men. The layout of the tent is formal and closely adhered to in each home. There are designated places for water, wood, stove and provisions. Guests sit to the left, younger people to the right. Women sleep nearest to the door and never cross the area behind the stove. This taboo extends outside the choom ; women do not walk across the back of the choom, even to a distance of a hundred metres from the tent. They also must not step over the poles used for guiding sleds or the ropes used for catching deer; otherwise these items become unusable. The back of the choom is sacred and formerly housed carved totems, the spirits of the home. The taboos are ancient and part of a fixed pattern of customs and behaviour that makes human survival possible at this harsh edge of the world.

The wealth of the nomadic women is measured in part by their tea cups, carefully wiped and stored between newspaper in the drawer of a low table. Skins and furs are their most valuable possessions; pelts of reindeer, Arctic hare and white fox are rolled in bundles around the edges of the choom, waiting to be sewn or traded. Young or baby reindeer skins are used for children’s clothing, including hoods with the tiny ears sticking up on top. Each woman owns a large reindeer skin pouch, beautifully decorated and hung with metal beads; this contains her personal items including sewing kit and pieces of coloured felt for creating the trimmings on coats and boots. Women collect and dry sphagnum moss in sacks laid on poles above the stove; it is used for washing and wiping, for padding baby cradles, for women’s bleeding. During the autumn they also collect a range of berries that grow across the tundra. The choom is laid with skin rugs around the sides and wooden boards across the middle where most of the work takes place. A waist-high narrow plank rests by the open door, on which animal skins are spread for scraping and softening. The floor is swept with a goose wing. The work of the choom is hard and constant; these women wear their years carved deep into their bodies.

Our day together folded into the night. We shared much tea and many toasts, strips of raw fish and boiled hare, and the pile of sweets and biscuits brought from the settlement. We moved through slow translated exchanges to a place where it became less necessary to understand each other’s words. Women from the neighbouring choom arrived, drawn in by the laughter. We all offered songs; Ruslan launched into a long and tragic Russian ballad with eighty verses but eventually we all made him stop. During the exchange of gifts, Nigel’s reindeer bone flute caused great interest. Nenets people do not have a tradition of bone flutes but the next day Radik could be heard across the tundra, playing the reindeer bone.

In the late night, two curtained partitions were unrolled from the poles of the choom so that each side of the tent was afforded privacy. The cloth was tucked under the floor skins to keep out dogs and draughts, and add to the warmth of humans curled close together under thick reindeer coats. I woke to the sounds of Tanya stirring, grumbling about stiff limbs, muttering over the fire. I kept very still; in that moment, with eyes shut tight, I knew I was balanced on the tip of one toe at the very edge of this northern world, held up by an ancient song of land and reindeer and nomadic journeys and the taste of the winter to come, and that once I moved, I would already be walking a homeward trail.

The Nenets people of the Siberian Arctic follow an ancient form of nomadic reindeer herding in one of the most challenging environments on earth. For them the reindeer is everything: meat for trading, food source, shelter, clothing, transport, spiritual fulfilment and the focus of social life. The reindeer is  revered as a sacred symbol and the Nenets believe that the people and the deer enter a pact, with reindeer offering themselves for subsistence and transport, and the tribe protecting them from predators during the seasonal migrations.

Tatyana Lar is a singer from the Siberian Nenets tribe, born into a family of reindeer herders, part of the Khra Khudi clan located on the banks of the river Yuribej, Yamal, Northern Siberia. Tatyana has been singing since the age of four and in 2007 she represented the Nenets people at the Forum of Indigenous People at the United Nations in New York. In 2009 she makes her first visit to the UK to perform concerts with us. She sings a blend of traditional songs and original compositions in her native Nenets language.

Friends, on this day let us come together in the gathering house.
My dear friends, I want to tell you about my birth.
When I was born my land Yamal
had taken off his white sovik (fur coat).
And my native land Gyda
had joyfully put on her beautiful decorated yagushka (coat).
And in honour of my birth
my motherland sang with the many voices of nature.

Ruslan Alikulov is a freelance journalist and photographer who used to write for the magazine Severnyie Prostory, a publication about the culture of the northern tribes. He lives in both Moscow and Kazan, and has made a number of trips into the northern Arctic regions. He has recorded a film of this journey. 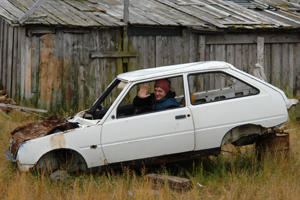